Festooned with colorful flags from port to stern, Sharla Tester smashed a bottle of bubbly wine across the bow of the newest addition to the U.S. Navy Fleet, the USS Billings. The ship’s sponsor proclaimed, “For the United States of America, I christen thee Billings. May God bless this ship and all who sail in her.” Her husband, U.S. Senator Jon Tester (D-Montana), named the ship in honor of the patriotic and hardworking citizens of Billings, Montana.

Amidst hundreds of cheers and whistles, the Freedom-class LCS 15 (a littoral combat ship (LCS) built by Marinette Marine for Lockheed Martin) was launched into the waters of the Menominee River in Wisconsin. It marked a major milestone in the journey of the USS Billings to join the U.S. Navy Fleet. 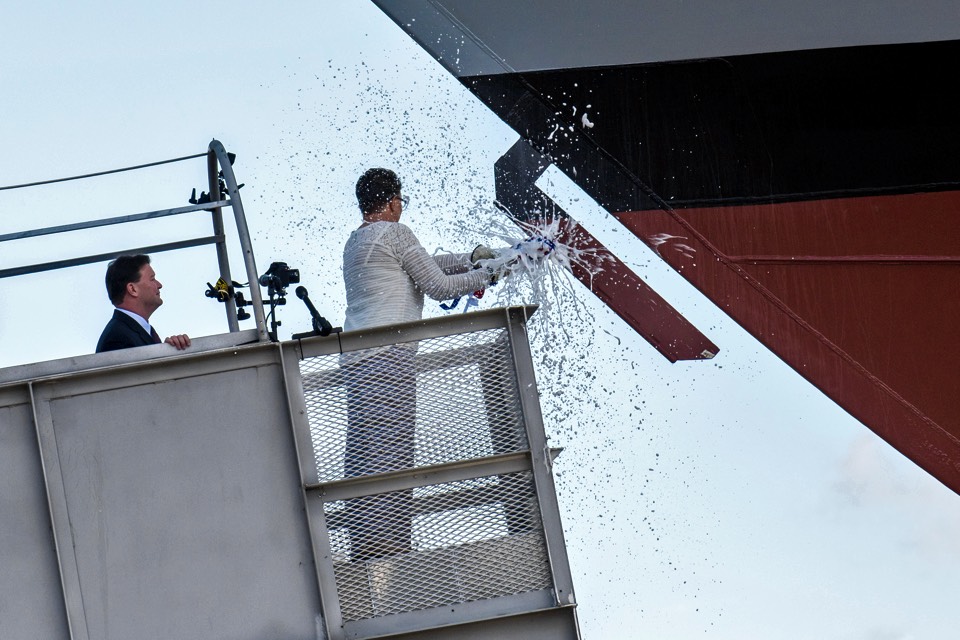 Since construction began in November 2015, crews have been hard at work on the ship but there’s still more to be done. “They will complete the construction of the ship… and more equipment needs to be installed on there,” says Nathan Rowan, the Commanding Officer of the U.S.S. Billings LCS 15. “That's going to take roughly a little over a year.”

In addition, now that the ship is in the water, the LCS 15 will go through a series of sea trials over the course of several months before it can be commissioned to the Navy. U.S. Senator Tammy Baldwin (D-Wisconsin) says LCS 15 is perfectly suited to some of the emerging challenges in the world. “How incredible [Navy ships] are for our national security, our state’s economy, and a tribute to the naval men and women who carry them out to sea with the U.S. flag pursuing our freedom,” Baldwin said.

The LCS ships, while small compared to the Navy’s aircraft carriers and transport ships, are intended for operations in the littoral zone. It was "envisioned to be a networked, agile, stealthy surface combatant capable of defeating anti-access and asymmetric threats in the littorals.” ‘Littoral’ means ‘near-shore’ and that’s where these ships were made to operate — in shallow water while performing a variety of missions. In 2002, America’s Navy recognized the need for smaller, more agile ships that could defeat asymmetric threats such as mines, quiet diesel submarines, and fast surface craft.

Littoral Combat Ships come in two classes, Freedom and Independence. Their key advantage is that they are reconfigurable and can be fitted with ‘mission modules’ specific to the task at hand. In addition, they were built to replace three previous classes of ships — mine hunters, Perry-class frigates, and patrol frigates. Half of them are homeported at Mayport Naval Station; the other half will call San Diego home.

Here in Montana, Sharla Tester was humbled and honored to take part in the traditional christening in early July. She said, “Walking up the podium to break that bottle of champagne and looking up at that ship, I’m going ‘I won't see this again’, so I just kind of soaked it in. I’m not just a sponsor, I’m an advocate for that ship and all who sail in her.”

And so, the USS Billings comes one step closer to joining the U.S. Navy Fleet. And we couldn’t be prouder! The USS Billings was named after our hometown, the home of Billings Army Navy Surplus.

You can see the ship christening and launch here. They refer to this ship as ‘small’ but the construction workers still look like ants in comparison!

Interesting Fact:
A ship sponsor is named by the Secretary of the Navy and is a great honor. The sponsor’s role is an important one as she will participate in all or some of the milestones in the life of her ship and by tradition will bestow ‘good luck’ over the seagoing vessel and all that sail aboard. The next important ceremony will be the commissioning ceremony and is one of the most important. The ship is then accepted by the United States Navy and becomes part of the active Navy Fleet. When the sponsor says, “Man our ship and bring her to life” and the crew board the ship, it is a momentous event — a patriotic and proud moment for all.