It was shortly before 8.00 a.m. on December 7, 1941. In a surprise military attack, the Imperial Japanese Navy Air Service bombed the U.S. Naval Base in Pearl Harbor. This officially drove the United States into World War II.

During the next four years, a vast area of the Pacific ocean, islands, and surrounding area, were plunged into a violent and devastating war unlike any other in terms of scale, scope, and savagery.

Today, The National Museum of the Pacific War in Fredericksburg, Texas, is the only institution in the U.S. dedicated exclusively to telling the story of the Pacific and Asiatic Theaters in WWII.

Since its humble beginnings in 1967, the museum has been upgraded and enlarged to a 6-acre campus. Today it features a state-of-the-art, 33,000 square foot gallery exhibition with 40 media installations, approximately 900 artifacts in 97 climate-controlled cases, 15 macro-artifacts, and hundreds of photographs.

The National Museum of the Pacific War is dedicated to honoring, teaching, and preserving this chapter of our nation’s history. It tells of the epic struggle and enormous loss of life resulting from the fighting. Interestingly, warfare in the Pacific War was very different than that in Europe.

Campaigns in Europe were often characterized by huge ground forces driving overland deep into enemy country. Through MacArthur and Nimitz, the Pacific War was a constant series of amphibious landings and island-hopping campaigns. Naval power, air power, and shipping were utilized, rather than large and heavy ground forces.

As for the soldiers and Marines who assaulted the endless beaches and atolls, the Pacific War was even more brutal and deadly. In 1945, Fleet Admiral Nimitz said, “Uncommon valor was a common virtue.” This described the spirit that characterized the U.S. Forces during those years of combat against an unrelenting enemy.

Founded almost 50 years ago in his name, The Admiral Nimitz Foundation manages and provides financial support for the museum. It is a national leader in teaching the history and lessons learned from the Pacific-Asiatic Theater of Operations during World War II.

The foundation also preserves the legacy of Fleet Admiral Nimitz and the men and women who served in this theater of operations. In addition, it facilitates programs that support all veterans, past and present.

According to the Billings Army Navy Store’s mascot, ‘The General’:

The National Museum of the Pacific War is one of the finest museums I’ve ever visited. So much to experience and a truly great facility. A must see on anyone’s war museum list.

Dive into the history of WWII and experience an unforgotten chapter of our nation’s past. Remember the eight million Americans who served in the war against Japan. Honor the more than 100,000 who gave their lives. Never forget their service to ensure the freedom we are privileged to enjoy today.

See extraordinary exhibits firsthand with tragic reminders of sacrifices made. Imagine what it might have been like taking off from the deck of the USS Hornet or being submerged in a Japanese mini-sub.

Be sure to plan in advance so you can attend one of the Pacific Combat Zone Reenactments. This is a living history program that puts you on the front line. You’ll experience the sights and sounds of combat as reenactors use objects from the museum’s education collection. They also demonstrate weapons and explain the tactics and strategy that won the war. It’s a total sensory experience!

As expressed by Chris McDougal, the Museum’s Associate Archivist and Librarian:

Our mission is to inspire our youth by honoring our heroes… and the best way to honor them is to truthfully and respectfully tell the story of their struggles, their sacrifices, and their triumphs, so future generations may learn the price of freedom. 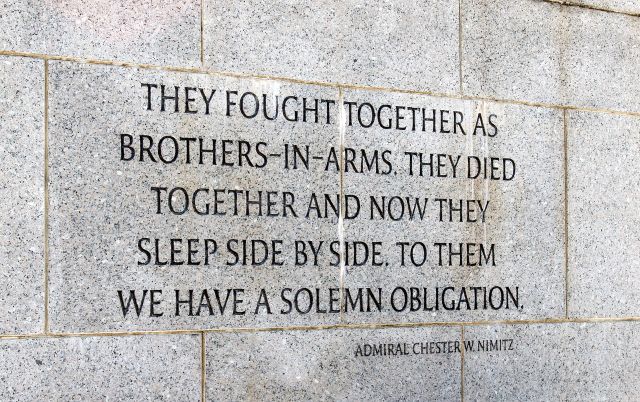 The Pacific War in Color

For more gripping history about the Pacific War, watch The Pacific War in Color an 8-part series on SmithsonianChannel.com. Witness the might attacks on Pearl Harbor, the Hiroshima and Nagasaki bombings at the end of the war, plus the fierce battles in between. Includes color combat footage and accounts from those who were there. This series reveals the brutality on the frontline during the battle for the Pacific.

The Pacific Ocean is the largest and deepest of earth’s oceanic divisions. It extends from the Arctic Ocean in the north to the Southern Ocean, or Antarctica, in the south. It is bounded by Asia and Australia in the west and the Americas in the east.

At 63,800,000 square miles in area (as defined with an Antarctic southern border), this largest division of the world’s ocean — and, in turn, the hydrosphere—covers about 46% of earth’s water surface and about one-third of its total surface area, making it larger than all of earth’s land area combined.

The ocean’s name was coined by Portuguese explorer, Ferdinand Magellan. During the Spanish circumnavigation of the world in 1521, he encountered favorable winds upon reaching this ocean. He called it ‘Mar Pacífico’ which, in both Portuguese and Spanish, means ‘Peaceful Sea’.