Imagine, if you will, an early 1950s North American F-86 Sabre, best known as the United States' first swept wing fighter, flying through Korean skies in a high-speed dogfight. One of the best and most important fighter aircraft in the Korean War, the F-86 Sabre proved versatile and adaptable. It continued as a front-line fighter in numerous air forces world-wide for decades to come!

Fast forward to 2014 and take a walk into our own Billings Army Navy Surplus store. Here you’ll discover our newest mascot, fondly referred to as ‘Tank’, a never-used Military Jet Drop Fuel Tank from the legendary F-86 Sabre. While ‘Tank’ looks like a large missile, we added our own brand of Go-ArmyNavy style and personality. And now he greets the world with a special design patterned after the nose art of many of the 1950s era of fighter jets — a snarling shark!

We acquired two of these fuel tanks (brand-new in their crates) and are proud to have obtained such a piece of history. One jet drop fuel tank is without adornment, the other is ‘Tank’ and we’re only willing to part with him if the right ‘home' is offered. 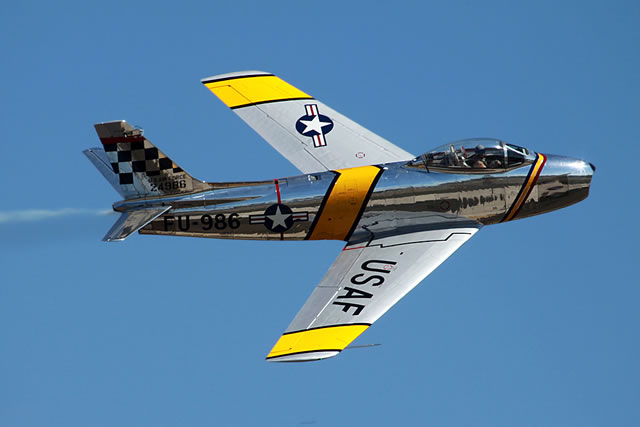 And, for warbird history buffs, here are some additional cool factoids about the amazing F-86 Sabre:

Jacky Cochran in the F-86 cockpit, with Chuck Yeager. (Photo in public domain on Wikipedia Commons.)

We had a lot of fun creating ‘Tank’. However, these crazy guys have outdone us to the max! They took three F-86 fuel tanks to make one amazing fuel tank shark sculpture. Incredible!

And, last but not least. See the F-86 and MiG-15 in action from the History Channel: Col. Ralph Parr in a dogfight during the Korean War.